Brief History of the School

In July 1864 the first Convent Primary school was opened in Templemore.   It was built on the site of what had been a Cholera Hospital on what was then known as Hospital Street.   The school was dedicated to St. Anne.   Extensions were made in 1888 and 1932-1939 when the town had begun to extend and thrive owing to new housing and improved health conditions.   By the end of 1949 it became apparent that St. Anne’s was no longer adequate in size as a school.

A site across the road was purchased and the foundation laid for a new Primary School.   Archibishop Kinane blessed the foundation stone on 2nd February 1950 and he performed the opening ceremony in August 1951.   The new school was dedicated to St. Joseph.   Post-primary pupils occupied St. Anne’s National School, which had done duty for 87 years, – as there was not then, nor for many years afterwards, any Government grants for the erection of Secondary Schools.

In 1976 an all-purpose room, The Halla, was added and the school repainted. The school has been extensively refurbished in recent years with new wiring, new roof, new playground surface, new kitchen and halla units etc. More recently a new wing “Sonas” was built providing a modern classroom and two support rooms.

In September 2021 we were delighted to welcome six students to our new, and much treasured ASD class, ‘Seoda’. A specific purpose and state of the art modular unit and play area which meets the needs of the pupils and staff was added to the school in November 2021 to accommodate ‘Seoda’.

There are no upcoming events at this time. 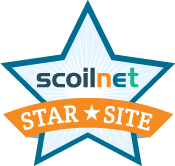